An Astrological View of the Chakras 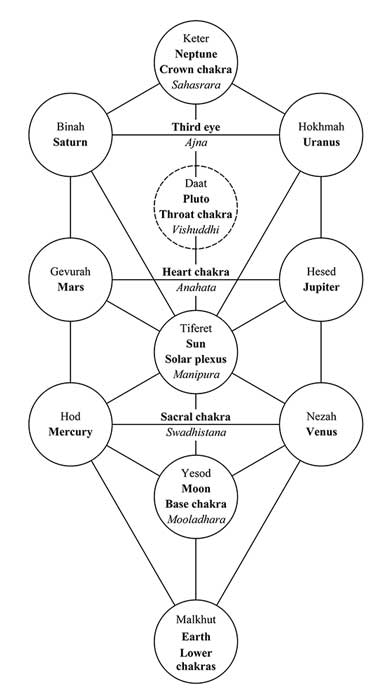 The Kabbalistic Tree of Life is sometimes called a universal coat hanger because any complete system or organism can be studied according to its principles. When I started to learn about Kabbalah, I was curious about how the chakra system could be related to the Tree diagram. When I saw the chakras as levels of consciousness rather than individual sefirot, it started to make sense. Thus, some chakras include two sefirot, like Hesed and Gevurah which can be seen as the dual function of the heart.

While I was studying kabbalistic astrology and observing current planetary transits on a daily basis, I noticed that sometimes a transit activated a chakra that corresponded to the same location on the Tree as the planet. For example, transiting Sun conjunct natal Mercury or Venus could be felt in the Swadhistana chakra. When a chakra is active, it often produces a distinct swirling or tingling sensation in the body.

Even a Moon transit, although it lasts only a few hours, can produce interesting effects. Once I was having dental treatment and decided to meditate. The meditation went so deep that I was hardly aware of what the dentist was doing. Even afterwards, going down the escalator of a busy underground station, all I could hear was silence. At home I looked at the ephemeris: the transiting Moon was conjunct my natal Neptune at the time. Maybe that extraordinary silence was an echo of the 4th heaven that underlies the Crown chakra and Neptune, seen in terms of Jacob’s Ladder.

Knowing the timing of the celestial clock is a great help in interior work. Certain transits create the right atmosphere for meditation and spiritual insights, while at other times it is better to focus on external matters. Especially important are the transits of the outer planets which may open a hidden door only once in a lifetime. Every day is a special opportunity because the current transits will never come back quite in the same combination.

The planets have an influence on both physical and psychological levels, while the chakras are the intermediaries between different Worlds. Imagine a water wheel turning, lifting water into the air and mixing air into the water. When the chakras or the wheels are turning at an optimum speed, one feels alive and well. If they are spinning too fast, it creates a manic mood while too slow a speed makes one feel depressed. This is an interesting area of study, especially for those who practise yoga or other minds/body disciplines.

The correspondences between the Tree of Life, chakras and astrology can be seen as follows:

The minor planet Chiron has its orbit between Saturn and Uranus and its influence is of a similar order.  It could be seen as part of the Third Eye as its transits can precipitate deep spiritual processes. When I had my Chiron return, I was attending a Koan retreat where we had plenty of time and encouragement to practise interior enquiry. It was awesome to perceive for “real” many ideas that I had only known as metaphysical theory.

According to tradition, there are higher chakras above the Crown. They are the intermediaries between the upper face of the Beriatic Tree and the lower face of the Azilutic Tree on Jacob’s Ladder. These may be activated in an advanced state of meditation when the mystic has direct experience of the 5th, 6th and 7th heavens and a taste of the Divine. There are also lower chakras below the Base chakra but this level of instinct is not part of human development.

Even animals have lower psyches and lower chakras, and it is possible to draw a horoscope of their character if the time of birth is known. Plants and minerals may not have chakras as they do not have spines and nervous systems, but they have their subtle bodies and are subject to cosmic conditions. Ancient astrologers classified them according to their planetary resonances. In artistic images of the higher Worlds, angels are sometimes depicted with wheels that turn into every direction, indicating that their cycles touch more than one level. In Kabbalah, the planets are seen as angels and the Sun as an archangel. The closest angelic being to us is the Mother Earth or Gaia.

In the middle of ordinary life, a chakra can sometimes become active as a result of a particular transit. Even a full awakening does not always follow the normal schematic way from the lowest to the highest chakra but there are many individual variations. As our birth chart is unique to each of us, so is our interior path. One person told me about the spontaneous awakening of her Ajna chakra. She described it as being like her nervous system had suddenly switched from ordinary electricity to a high voltage current. She had the transiting Sun, Moon, Mercury and Venus conjunct her natal Uranus as well as transiting Jupiter opposing it all within one week, creating that extra pressure. It took her six weeks to return to “normal”.

Sometimes the awakening of the Third Eye is associated with hearing celestial sounds like humming or ringing bells. I have noticed that such a phenomenon sometimes happens during a strong Uranus transit.

Mystics like St. Teresa of Avila were probably not familiar with astrology or the chakra system as they never mention them, but some of their descriptions of their inner experiences are like straight out of an astrological textbook. They describe “trials” when, for example, the soul feels completely arid (Saturn transit) or the mind goes so fuzzy that they cannot put two thoughts together (Neptune).  St. Teresa also spoke about special “favours” given to the soul when God seems nearer than at other times (Jupiter/Neptune).  She said that God gives these experiences in His own time. She was correct, because ultimately everything comes from God, and providential timing is closely related to astrology.

The chakras operate automatically as long as the person is alive, even though the individual may not be aware of them. Changing from an automatic to a “manual” system requires more work but it gives greater freedom and more possibilities. There is a shift in perception, like moving from flatland to a three-dimensional environment, and one starts to get glimpses of the fourth dimension, that which is hidden behind the surface. The way home to Eternity goes through Time. Astrology provides that map for travelling through this ever-changing landscape.

(For a further perspective on the Chakras System, please see “Chakras Explained! The Complete Beginners Guide to the Seven Chakras” at https://www.alittlesparkofjoy.com/chakras/ ).